Writing this looking back over a fantastic visit from Mum and Dad Lawson here in the Six – as Dad and some lad named Drake like to call it.

We were delighted to be able to wrap up work early to greet them at Union Station late Friday afternoon however even more delighted to start to share our Toronto experience with loved ones. Negotiating the financial district and the Bay Street slickers en route to our apartment – our comprehensive Toronto tour began – with Greig even introducing them to one of the ‘bux regulars on the walk up towards Queen Street.

Cracking open a welcome champagne we got caught up on the gossip, and got used to the idea of all being in the same place again without the use of FaceTime! With the sun slowly setting over the city we all took in the view, one which we still marvel at. After dark, we wrapped up warm – Dad taking no chances with his thermal tight/jean combo, hat, scarf, vest, tshirt, jumper, fleece and waterproof jacket – Baden-Powell would have been proud.

Our day began with a walk south down Church (Street) through Toronto’s Old Town, thankful for the blue skies and crisp air as we reached and admired the Gooderham Flat-Iron building.  We then ducked into the nearby St Lawrence Market where we grazed on a plentiful supply of samples, saving our appetites for brunch at one of our favourites: Paddington Pump – a bustling, tried and tested, does-what-it-says-on-the-tin, diner. Eggs Benny and good ol’ Canadian Peameal all round! Superb. Grabbing some Portuguese custard tarts and strawberries for later, on exit from the market we went out for a now blustery walk towards the waterfront for first glimpses of the Fairmont Royal York, the CN Tower and Lake Ontario. Lucky then to find shelter, drinks and an amazing brewery tour at the Amsterdam BrewHouse! Look out for Dads Trip Advisor review featuring helpful host Helder. 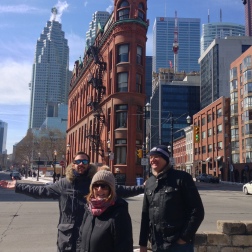 Content with our afternoon, we decide to shelter from the cold as we headed home via the PATH system – a 30km network of pedestrian tunnels beneath Downtown Toronto. A reasonable first attempt tackling the largest underground shopping complex in theee worrrrld.

Recharged we head back out and up to One Eighty – a swanky not too touristy rooftop restaurant on the 51st floor of the Manulife Building on Bloor Street. Providing superb panoramic views of the downtown core as well as a fiery sunset. After some drinks, we head to our old neighbourhood: Little Italy, a short walk/streetcar away. Falling back on an old favourite, we seat ourselves in Cafe Diplomatico’s for two gigantic pizzas and more cocktails! Busy first day. 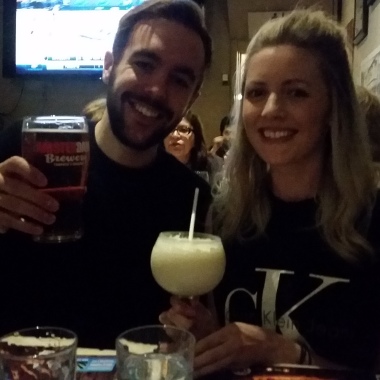 Niagara Day! Up n at ’em early as we head down the 401 West to Niagara Falls. We take a look at the Falls and can’t believe our luck with the weather, it is sunny AND warm for the first time this year!  In comparison to our last visit on a freezing January morning, Niagara is almost unrecognizable in this weather. 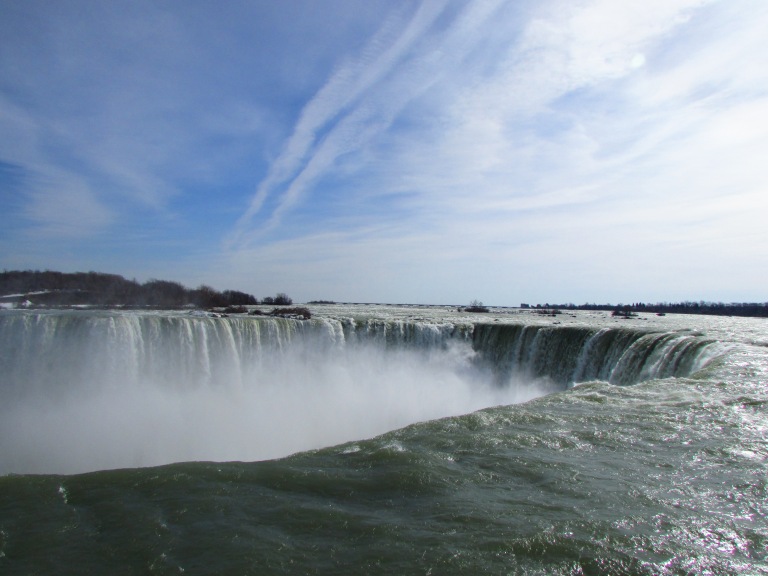 Following the Falls, we had a brief drive through the overly-tacky town of Niagara en route to the first stop on our tour of the vineyards of Niagara-on-the-Lake.  Greig drove us north along the very scenic Niagara Parkway – a quiet road which skirts the U.S border.

The wineries are a lot of fun to visit.  It’s the second time we’ve done a tour of Niagara-on-the-Lake (both times with Greig as the designated driver).  There are over 90 wineries in the region, so this time we tried out some that we had never been to before; Inniskillin, followed by Peller Estates, Two Sisters, Pilliterri and finally Mike Weir Winery.  In each winery you generally get offered around 3-5 samples for a couple of dollars or for free if you buy a bottle,  The region is most famous for their Ice Wine – a syrupy sweet wine served in a small ‘nip’ sized glass. This dessert-style wine generally costs around double the price of a regular bottle of wine, but it is no wonder – it taste like summer in a glass!  Delicious.  We stock up by purchasing a bottle from each winery! 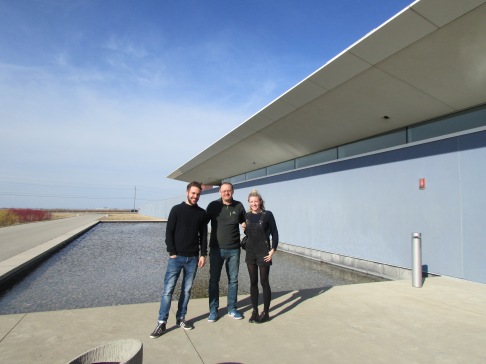 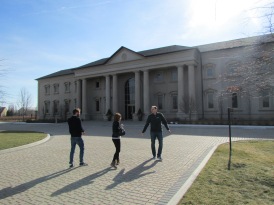 We drive back to Toronto where we have a quick visit to the Distillery District.  We then drop off Mum and Dad at their new residence for the week – The Fairmont Royal York – the oldest and grandest hotel in the city!  This is followed by the Loose Moose for some scrumptious food!

A slightly lazier start to the day after our long day trip yesterday.  We meet Mum and Dad at their lavish hotel and head north on the streetcar through Chinatown to Spadina Station.  A small walk later and we arrive at Casa Loma – what the locals like to call the Toronto Castle.  It is perched high on a hill overlooking the whole skyline.  Amazing views!  We decide to venture inside (mainly to get out of the cold!) but so glad we did as it was fantastic building.  Interesting audio tour around the castle which was home to Sir Henry Pellett – a top-dog Torontonian banker who owned the property in the early 1900’s and who’s fall from grace caused him to loose his fortune and his ‘castle’.

“Take 9!”: Dad recreating a scene from X-Men, one of many films shot at Casa Loma.

After Casa Loma we grab a taxi down to Kensington Market and go in search of a wee afternoon piece.  Find a great wee spot – Wandas Pie in the Sky, a scrumptious cafe serving freshly baked coconut pies and croissants.

Afterwards we get our first flurry of snow as we walk the streets down to the Entertainment District.  We have a couple of cocktails in La Cartina, then head to Dundas St West in search of some Chinese food for dinner.  We stumble upon Kimchi Korea House – which could quite possibly be the highlight of the trip.  We order a selection of Korean dishes – all of which we had never before tried.  Not only was the food fresh and delicious but the service was very friendly – something which is lacking in most restaurants in Toronto.  By the end of the meal, we had our waiter telling all his colleagues and anyone that would listen to him that the food was ‘affa fine’!

For myself and Greig, these days were spent working as real life unfortunately had to continue despite the visits from home.  We had a huge snow storm overnight on the Tuesday, probably the biggest snowfall of the whole season!  Mum and Dad did a spot of shopping during the day on Tuesday followed by The Who gig at Air Canada in the evening. 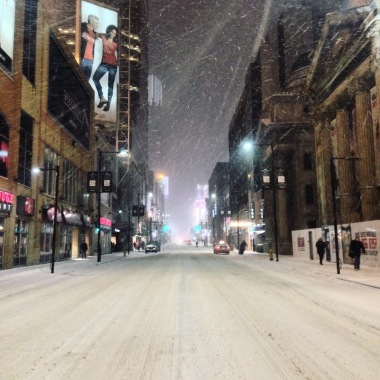 Wednesday evening was spent at the Air Canada Centre (again) for our first NBA game; the Toronto Raptors vs. Utah Jazz,  what a night of entertainment – from the Flex Cam, to the Shirt Cannon to the game itself!  The Raptors won the game which was a great end to the night.  Its quite unusual for us to support a team which are top of the league! 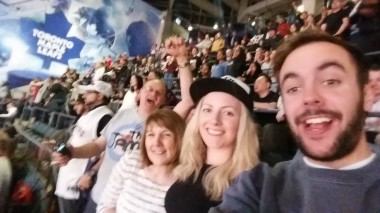 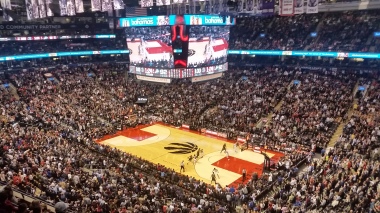 Thursday evening was spent in the company of Denise and Cliff at an Italian Restaurant on Victoria Street, thoroughly enjoyable evening and great for the ‘parents’ to meet. 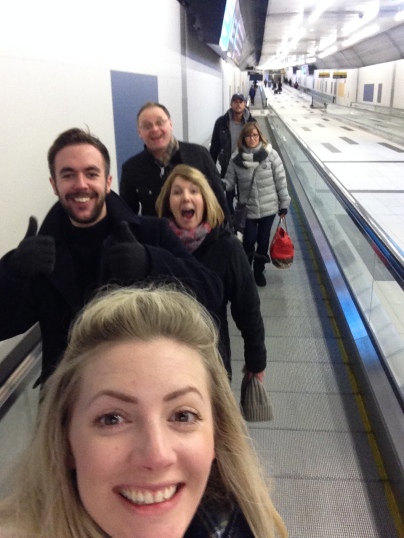 Under lake ON, en route to Billy Bishop Airport. 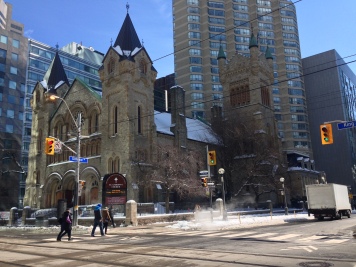 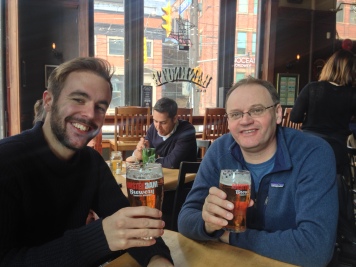 Friday was SURPRISE DAY!  Greig and myself had booked a surprise for Mum and Dad a couple of months back when they had initially booked their trip.  No hints were given as to what the surprise entailed other than that we needed the weather to be nice – preferably sunny with blue skies!  Lucky for us – the weather was on our side.  A morning stroll through downtown, stopping off at the Dineen coffee shop on Yonge St – a beautiful old building that until recently had been sitting empty and derelict for years.  Following on West and slightly South (in the direction of the surprise) to the Banknote pub for some cocktails, beers and pizza.  It was now approaching surprise time (3pm) so we headed to our destination – Billy Bishop Airport for a private flight over Toronto and the GTA!

We met our pilot – a nice young chap named Matt who took us outside to our plane (a Cessna 206).  It was TINY.  A five-seater with barely enough room for us all!  I was first inside – a wee seat at the very rear of the plane.  In front of me were Mum and Dad, and up front was Greig who had a seat next to Pilot Matt.   On the headphones and up we went!  With the airport situated on the Toronto Island, the views upon take-off were epic.  You could see the whole of Downtown and beyond!  We flew East in the direction of Denise and Cliffs house and then looped back to Downtown core.  We looped Downtown a couple of times and I was beginning to feel a bit iffy.  I think on the third circuit I looked over to Mum who appeared to be suffocating herself in a dog poop bag!  Mum’s wrenching was enough to set me off – thank goodness for the blue sick bags stowed in the back of the plane!  I quietly barfed in the back seat, and thankfully Pilot Matt was none-the-wiser until I emerged from the plane at the end with my bag-full of sick!  #spewyladies. 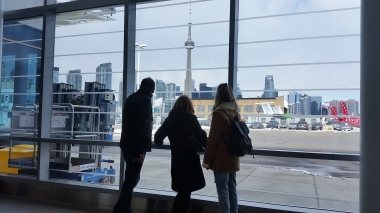 Dee and Cees well below. 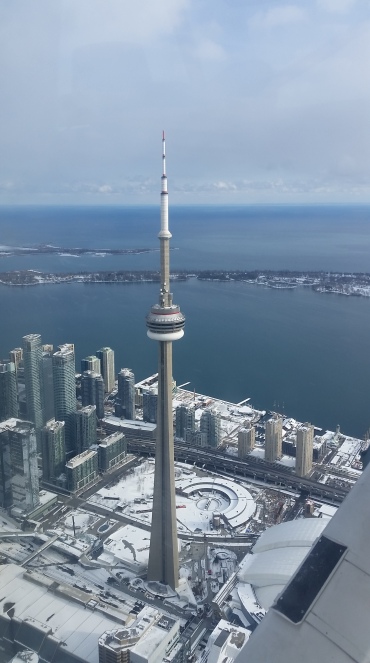 What a laugh.  That flight really took it out of us!  We walked home (previous plans of visiting rooftop bars well and truly made redundant after our traumatizing experience!)  Feet well and truly on the ground for the remainder of the evening.

Brunch was eaten at the Senator – an unassuming old-school diner located near Yonge-Dundas Square.  Brilliant breakfast!  We then strolled up to Yorkville along Bloor Street, the ‘Mink Mile’ of Toronto.  (Not the ‘mink’ we are familiar with in Aberdeen, but a high-end designer shopping area).  We walked through the University of Toronto and had a snowball fight which mainly involved everyone pelting me with snowballs and falling over – much to the amusement of onlookers!

At 5pm we had reservations at 360 – the revolving restaurant at the top of the CN Tower.  Having tried it back in December with Stuart we were hoping for a better experience this time round.  Unable to book a window table in advance, we arrive at opening time to be told that there are no window tables available!  Upon further inspection of the restaurant from Dad, he notices around 20 window tables unoccupied.  This ofcourse doesn’t go down well. And neither does the argumentative and unaccommodating waiters.  Informed that we cannot have a window seat until 90 minutes later, we are happy enough to go downstairs to the viewing platform.  The views are incredible; we caught a beautiful sunset which reflected across the whole city.  We enjoy an ‘affa fine’ meal (at a window table) in the unpretentious Horizons Restaurant – located only one level down from the revolving restaurant.  Happy with our choice, we enjoy the views overlooking the big city. 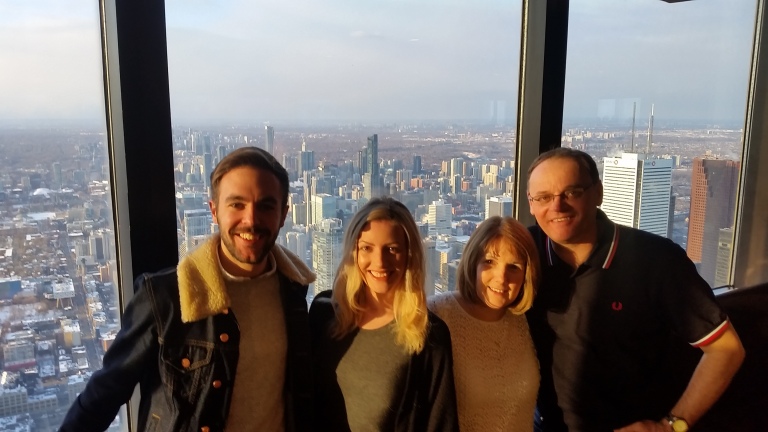 After dark, we head to the Entertainment District for more drinks followed by the Library Bar which is located within the Fairmont Hotel.  Top waiter was chuffed with is accidental polaroid! 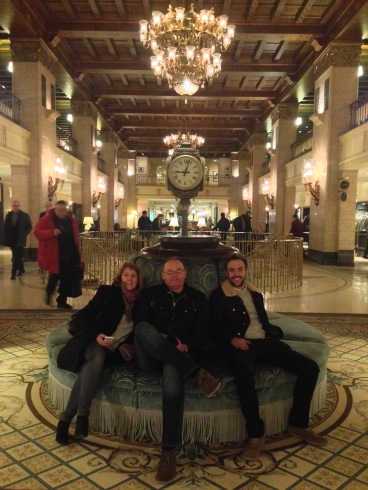 Final day (boohoo).  Beautiful blue skies for Mum and Dads final morning in Toronto.  We head to to Evergreen Brickworks on the Don Valley.  We gather round the fire-pit to keep warm and take an enjoyable walk up to the the viewpoint and around the grounds.  We then head back to the Old Town where we hit up Hanks for brunch number three of the holiday! 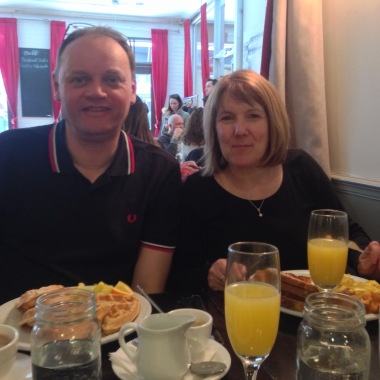 Trek in the snow.

Colin delighted with his Hungarian Chimney.

We walk Mum and Dad to Union Station mid-afternoon to catch their train back to the airport.  Emotional but funny goodbyes had as Greig and myself chase after their train on the platform!

For now, back to solo Grynsey.  Please come back soon!

One thought on “Conquering Toronto.”